Few places hired black designers but Thomas Miller got a job at Morton Goldsholl Associates, one of Chicago’s top design firms. He stayed with Goldsholl for more than 33 years. Though he won numerous industry awards, Miller always remained in the background even though he was responsible for some of Goldsholl’s best-known projects such as the redesign of the 7UP packaging and identity program. He was the first African-American to break into the mainstream profession of graphic artist, and during the 1950s and 60’s was one of few to maintain a membership in traditional trade organizations like The Society of Typographical Arts. Connections such as these were necessary to maintain and advance one’s career.

AT MORTON GOLDSHOLL : As chief designer
• 1976 – Redesign of the branding for 7 Up

The founders’ murals are Miller’s magnum opus, and beautifully demonstrate the creativity that is typical of his work. Unlike traditional mosaic that is made with earthenware or glass tile, these are made from thousands of pieces of plastic that were harvested from plastic egg crate light diffusers which were then individually colored and arranged to create the images in the series. “Anybody can do an oil painting,” he said during an interview, “but to take a face and do it with squares is hard. They have to be turned at an angle to catch the light”. In addition to portraits of the founders, the series includes a portrait of Jean Baptiste Point du Sable, and a collage depicting the history of Chicago.

The papers of Thomas Miller are archived at the University of Illinois at Chicago and include photographs, proof sheets, slides, award certificates, realia, prototypes, calendars, periodicals and samples of his designs for industry. (7-UP, MIC, Betty Crocker’s Chicken Helper, children’s textbooks etc. are found throughout the papers and in the photographic images, slides and realia. STA: The 100 Show, 1961, 1986, and Simpson Connections Calendar, 1985 were transferred into the Special Collections Rare Book Collection.)

— Complied from Victor Margolin presentation on “African-American Designers: The Chicago Experience Then and Now” at Looking Closer: AIGA Conference on History and Criticism February 2001; TheHistoryMakers.com; Wikipedia 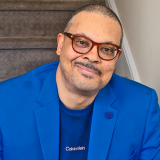 Self-starting Creative Director/Art Director with over 20 years experience leading brand strategies implemented over different media applications. Known for being hands-on from concept to execution and skilled with meeting deadlines while being very budget conscious. Comfortable not only providing creative leadership to a team but as well as taking direction. Classic design sense coupled with innovate solutions have lead to numerous awards. Excellent skills in oral and written communications as well as concept presentations.